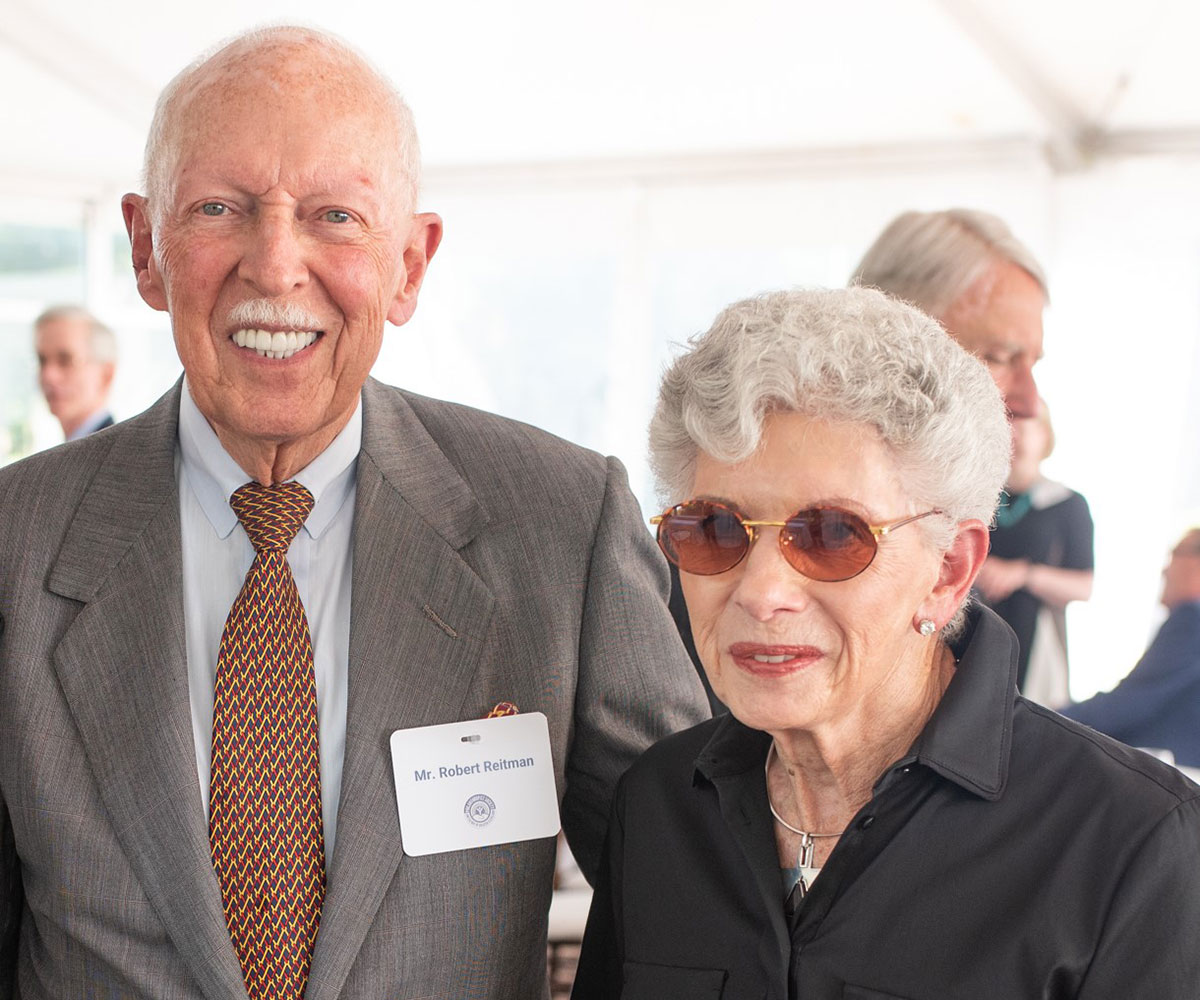 Sylvia and Bob Reitman have left their imprint on our community. From University Hospitals and Playhouse Square to a long-standing partnership with United Way of Greater Cleveland, the Reitmans set an example for others of how to give back with generosity and humility.

“Repair the world,” in Hebrew tikkun olam, is a Jewish concept that has guided Bob and Sylvia Reitman through a lifetime of generosity. The Reitmans’ commitment to social responsibility continues to impact United Way as well as other organizations in Greater Cleveland. For their selfless giving through the Reitman Family Foundation, the Reitmans received the 2019 Foundation Leadership Award from the Association of Fundraising Professionals (AFP) Greater Cleveland Chapter following a nomination by United Way of Greater Cleveland.

Throughout his career as a successful businessman and entrepreneur, Bob has embraced charitable works that benefit the health and human services sector and strengthen the vibrancy of Greater Cleveland. The retired chairman, president and CEO of The Tranzonic Companies and current principal of Riverbend Advisors has shared his time, talent, and treasure with the Cleveland Zoological Society, the Cleveland Museum of Natural History, the Jewish Federation of Cleveland, ideastream, Playhouse Square, University Hospitals, and Case Western Reserve University’s Schools of Law and Medicine.

When Bob connects with an organization that addresses issues important to him, he’s typically in it for the long haul. He has been active with United Way of Greater Cleveland since the 1970s and now serves as Life Director. Bob’s ability to combine business acumen with a compassionate nature has made him a vital leader on United Way’s fundraising, marketing/communications, nominating and allocations committees. Indeed, there is likely not an aspect of United Way of Greater Cleveland that hasn’t benefited from Bob’s expertise.

Bob and Sylvia have been generous donors to United Way of Greater Cleveland and continue to be among United Way’s major non-corporate funders. They have led by example, giving during the Great Recession and inspiring a challenge that resulted in $500,000 from donors. Their unrestricted contributions have provided United Way’s leadership the flexibility to direct the funding to where it is most needed in the community. And, it is their intent to continue their giving for generations to come as founding members of United Way’s Legacy Circle.

Repairing the world remains a family endeavor for Bob and Sylvia. They instilled in their two children the importance of giving back, and they want to ensure that their grandchildren and future generations continue the mission. Nowhere is that more brilliantly apparent than within the Robert S. and Sylvia K. Reitman Family Foundation, which they established in 1997. The idea behind the foundation was not only to help the health and human services sector, but also to unite the members of the Reitman family in meaningful and long-term philanthropic work. Sylvia serves as president of the Reitman Family Foundation, which is a supporting foundation of the Jewish Federation of Cleveland.

Bob remains optimistic about United Way of Greater Cleveland as it pivots toward the Community Hub for Basic Needs. The template that the organization had successfully used for years to raise funds was no longer applicable. “We had to take corrective steps to address younger donors who recognize a social element to philanthropy,” Bob notes. “Young people want to put their hands on what they do. They get satisfaction from involvement.”

This presents an ideal opportunity for younger donors to engage with United Way of Greater Cleveland, Bob says. “It’s not enough to critique. We are open to evaluation of our fundraising as long as it results in constructive improvements. Based on its past accomplishments, United Way deserves the opportunity to move forward.”

Thanks to individuals like Bob and Sylvia Reitman, United Way of Greater Cleveland can continue to make great strides in helping those in need. The Reitman Family Foundation promises a long-term partnership working toward the shared goal of repairing the world around us.

United Way was a prototype representative of the broad social responsibility that exists for the well-being of those who, from time to time, are in special need. Through United Way’s programs, we’re not just helping an individual, but we’re helping society.”

Sign up for up-to-date information, news and how to take action in public policies so you can make a difference in the lives of others.