PNC is Committed to the Communities It Serves 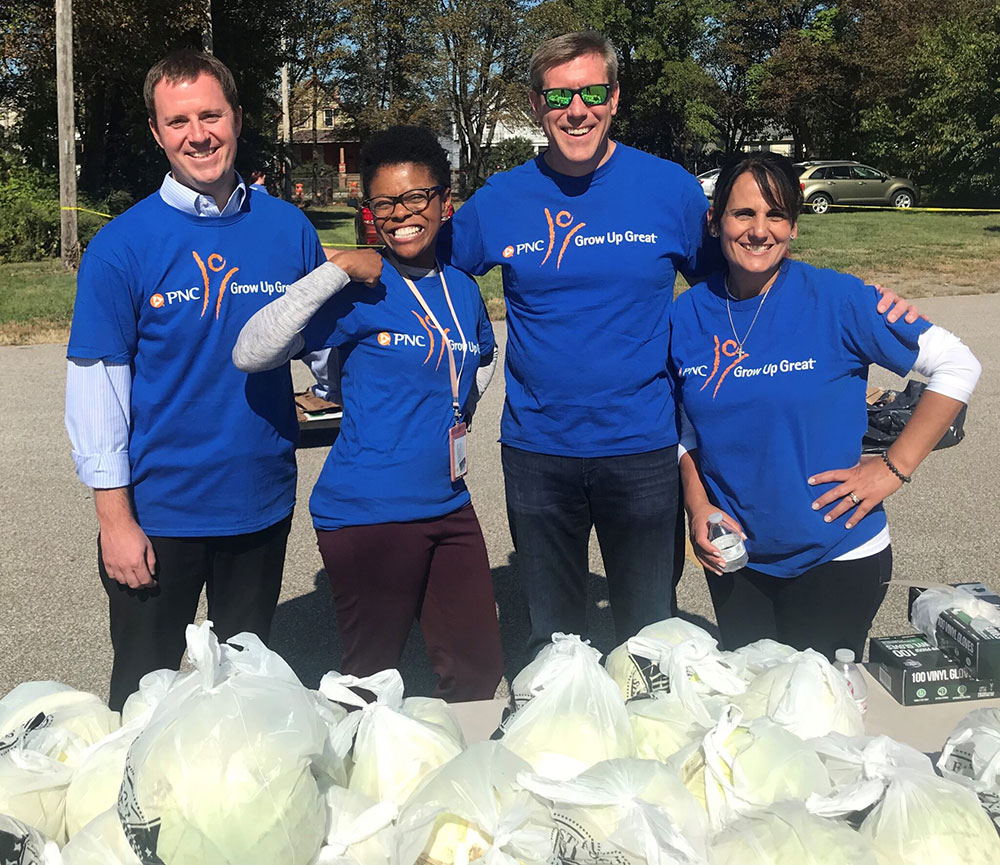 As a Main Street bank, PNC understands that each of its communities is unique. That understanding plays an important role in not only its business model but in its philanthropic philosophy as well.

“PNC is a large bank. We are the fifth largest bank in the country, but we go to market locally,” explained Pat Pastore, PNC’s regional president, Cleveland. “We know that every community is different, so how we give depends on the market. Our giving is led by the regional president and our local leadership team in each market PNC does business.”

“Working in, and supporting, the community are core to PNC values,” said Erin Deimling, client and community relations director at PNC. “Our branches and offices are in the communities where we live, work and play, therefore we are deeply involved.” PNC’s support of United Way of Greater Cleveland reflects this philosophy. In fact, PNC’s Workplace Campaign is one of the top five in Cleveland.

Erin’s team led the United Way campaign this past year. “We have a great partnership with United Way of Greater Cleveland,” said Erin. “I think that a big reason for this is that our priority areas of giving are aligned with United Way’s mission.” Much of PNC’s campaign is built on internal communication, especially during this year when many employees are working remotely. PNC relied heavily on its seven Employee Business Resource Groups to align employee interest with the focuses of United Way’s charitable giving and initiatives.

Lunch & Learns proved to be a very effective way to connect with employees during this year’s campaign. Working closely with United Way, Erin’s team was able to build programming that really resonated with PNC’s employees. Lunch & Learn topics included hunger, social equity, and COVID-19’s impact on our community. Each event had 70-80 employees in attendance.

Pat Pastore is no stranger to United Way’s Workplace Campaign. In fact, he was the co-chair for the 2013 United Way Workplace Campaign. “When you chair a campaign, you get up close and personal with the inner workings of United Way and you hear the stories of need in our community. I learned about the impact that United Way is having in alleviating poverty, in helping to improve our overall community.”

Pat is now a member of United Way’s Board of Directors, on our Executive Board Leadership Team, and serves on two committees. When asked why he is so involved at United Way, Pat responded, “Once you get to know United Way – what they stand for and what they do – you appreciate the impact they are having on people’s lives. Combine that with meeting the staff and seeing how committed they are to this community and you can’t help but want to be a part of it. It is an honor to work with the staff and Board at United Way to make Cleveland a better place for all.”

Making Cleveland a better place is a PNC commitment. When COVID-19 struck, PNC realized that its Main Street bank approach to local service has never been more important. “Our roles at the bank are to be responsive and support the community,” said Erin. “When the pandemic began, we knew that we needed to respond immediately. We reached out to many of our nonprofit partners to find out how they were doing and how we could assist quickly and have the greatest impact.” PNC’s first round of funding into the community focused on immediate response needs. One of its first major grants was to United Way 211, because it believed 211 was perfectly positioned as the community’s gateway to basic needs. Additional grants were given to the Greater Cleveland Rapid Response Fund and the Greater Cleveland Food Bank as well as funds to support frontline healthcare providers.

PNC continued to listen to the needs of the community. In September 2020, PNC provided $250,000 to the Cleveland Metropolitan School District, Boys & Girls Clubs of Northeast Ohio, East Cleveland City Schools, and Breakthrough Public Schools to support remote learning, including digital learning resources, such as computer equipment, tutors, and internet connectivity.

Another example of PNC’s philanthropic work is its volunteerism. PNC encourages its employees to roll up their sleeves and volunteer in the community. Every year, employees are given 40 hours of paid time off to volunteer for early childhood programs aligned with PNC Grow Up Great, an initiative that supports children from birth to age five. “Most PNC employees take advantage of this opportunity to volunteer,” said Pat. “Since the program began in Cleveland in 2009, PNC employees have logged more than 79,000 volunteer hours. When we talk about philanthropy, we view time as important. We know that everybody has limited budgets and we feel very strongly that time and advocacy are just as important as treasure. We encourage a holistic approach to philanthropy.”

At PNC, philanthropy and company culture are intertwined and the bank’s employees are building a better future for Greater Cleveland.

Sign up for up-to-date information, news and how to take action in public policies so you can make a difference in the lives of others.